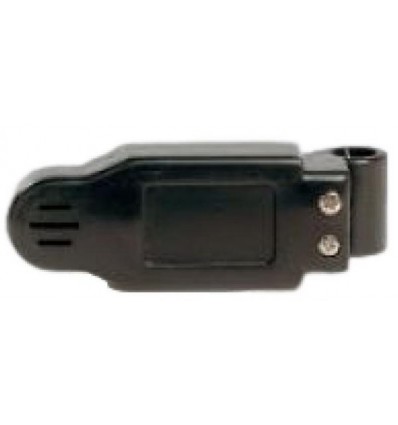 Notify me when available
Spend 0,00 € more and get Free Shipping!

This Replacement Electret Microphone with deported Axis for Pilot headset replaces the original microphone when that one is defective due to a tear in the diaphragm or the distension or hardening of that diaphragm. ( This type of Electret Mike is not suitable for Flex boom )

You have found that your headset microphone is faulty, nothing is transmitted when you speak or you have to speak very loudly to activate it. CAUTION faults are not simply due to the microphone a wire may have broken in the cable at the microphone jack output for example or a cable solder is defective or your headset has taken a shock.
A microphone is an element that wears out and remains a fragile point of any headset or helmet. Without a protective wind muff that first reduces the surrounding noise and prevents the air pressure from activating too strongly on the microphone membrane. The diaphragm of the microphone is subjected to high pressures, so the squelch must be set at a lower level.

The "Voice activation" setting, ie the setting level of the trigger by the voice activation on your earphone will also be set lower.


To preserve your microphone in time it is necessary to use the windscreen, it protects it What is the principle of the electret, the membrane of the microphone is stretched by a small electronic circuit and a capacitor that goes according to the noises picked up from the outside It stretches more or less this membrane, and therefore generate a resistance by tension on this membrane.

This microphone is very fragile, the more ambient noise or the impact of the voice is brutal and strong and more the membrane tightens. The fineness of this one makes its suppleness, it fears strongly humidity. From where the utility of the protective windscreen that will create a barrier and will filter the moisture coming out of your mouth, this one is really necessary.

How to place the microphone?

A microphone whether on a headset or a sound amplifier for a speaker or an intervention is carried in the hollow of the chin in contact with it (it will allow you to move your head from right to left without losing intensity in your voice). Your voice activates it but the water vapor of your breath passes to the top as well as the bump during passage of silence to speach.

As often noted in the different TV reports where we see pilots in action they place the microphone directly in front of their mouth, is not the recommended way of use

To test a microphone NEVER NEED TO BE BLOWED IN, the test is performed by stating 1 - 2 - 3 test.

Unscrew the two retaining screws from the cables or the racking needles with a very thin screwdriver. Then unscrew the pivot pin system allowing the positioning of the microphone when in use then unassemble the microphone by exerting a pull of release of the boom after disconnecting the wires, be careful not to tear the wire off. Replace the faulty microphone by performing the reverse operation, sometimes it is easier to connect the wires before putting back on the pivot axis.

30 other products in the same category:

Gel Ear Seals for Aerodiscount and other brand ANR or...

Foam Ear Seals for Aerodiscount and other Brands ANR or...